http://www.deborahrossministries.com/apps/articles/default.asp?blogid=6766&view=post&articleid=84666&link=1&fldKeywords=&fldAuthor=&fldTopic=0
Friday, April 05, 2013 • Mrs. Deborah Ross • Sexuality
OK... so I am a little slow. I kept seeing all of these signs on Facebook and had no clue of what they all meant. So I made a post and asked, "What does the red block with the two pink rectangles in the center mean? I've seen it twice today."

... The truth is that God does love everyone! 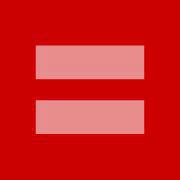 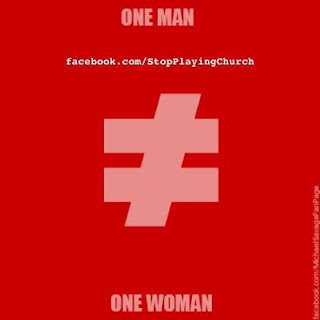 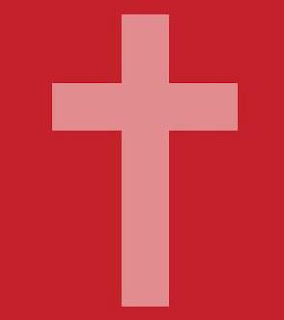 OK... so I am a little slow. I kept seeing all of these signs on Facebook and had no clue of what they all meant. So I made a post and asked, "What does the red block with the two pink rectangles in the center mean? I've seen it twice today."

The first reply said, "It's an equal sign meaning equality rights." So again in my naivety I asked, "What kind of equal rights?" The next response was, "Gay Marriage." Then, I noticed all types of comments ranging from those trying to help me understand the sign, to those offering the alternative sign of the cross and of the anti-gay marriage symbol.

Then, I flipped to a friend's page where there was a heavy (really nasty) debate about what the Bible says about the gay lifestyle. Some were claiming to be graduates of seminary who didn't see anything wrong with gay marriage; others were pastors using force and unpleasant wording claiming that God hates this lifestyle and that America better look out!

Sadly, both "ministers of the gospel" were missing the message of Christ altogether. The word of God has been, and always will be, the standard for every civilization on earth. Since there is only one true God who created heaven and earth, He is the author and judge of what is right and wrong among His creation.

So, as I am reading through this Facebook thread on my friends page, I notice a post made to my page from a childhood friend that includes an article based on "Judge not that ye be not judged." - Matthew 7:1. So I read it!

Having said this, I did agree with the writings of that author to a certain extent. He makes a very good point about how Christians so often miss the mark in balancing their proclamation of faith. His article was long and detailed with scripture to prove his point about how we are to love all people. On this point, I fully agree. The problem with his article is that it pointed to loving the gay lifestyle.

The truth is that God does love everyone! He loves them so much that He wants them to repent of their sin, humble themselves and be born-again! His grace covers us as we bow down and accept His righteousness in "exchange" for our sin. Jesus died on the cross so that all could be saved. This doesn't mean that all will believe, nor does it mean that all will repent of their sin(s). Surely, the gospel "is" good news! The Lord loves humanity so much that He doesn't want anyone to suffer the consequences nor the destruction of sin. Sin leaves a guilty stain in the soul of mankind that can only by erased by the blood of Jesus. This blood can only be applied through repentance.

There are so many Christians who are afraid to speak the truth on this issue... in love! Hebrews 4:12 says, "For the word of God is quick, and powerful, and sharper than any twoedged sword, piercing even to the dividing asunder of soul and spirit, and of the joints and marrow, and is a discerner of the thoughts and intents of the heart." While many may try to twist the word of God to make it fit into their belief system, God knows their motive. He knows their deepest, hidden sin. His word is either a cornerstone or a stumbling block. My prayer is that "I" will grow to accept more and more of His word, His ways, His absolutes, His righteousness, His peace, and His grace each day that I live. What a waste for anyone to argue that God's word doesn't mean what it says. He wants all saved! He wants all to come to repentance! He wants all set free from the bondage of sin! Anyone who tries to hang onto their sin, while claiming the love of God, has missed the mark. It's not about rules. It's about a life that is FREE INDEED. If we say we love God, we should also love what He loves... and hate what He hates. God hates sin because sin hurts people!

So often, Christians either avoid controversial topics altogether, or they blurt out the facts without filtering them through the heart of God. So getting back to the favorite verse that is used by those who want to keep their sin and claim God too... "Judge not lest you be judged" from Matthew 7. Verse 5 tells us that we should first get the beam (or sin) out of our own eye before we attempt to cast the mote (or splinter - lesser sin) out of someone else's eye. So Jesus wasn't telling Christians not to judge right from wrong, He was simply saying we should clean our own act up before we try to help someone else get cleaned up.

1 Corinthians 6:2
2Do ye not know that the saints shall judge the world? and if the world shall be judged by you, are ye unworthy to judge the smallest matters?
1 Corinthians 11:31-32
31For if we would judge ourselves, we should not be judged.
32But when we are judged, we are chastened of the Lord, that we should not be condemned with the world.
You see my friend, everything in the Lord's Kingdom needs to be handled with compassion, balance, love, power, authority, and yet with humility - all at the same time. As Christians, we are simply saying... "I once was lost (like you), but now I am found!" We are crying out to those living in darkness that the Lord has a peaceful, promised land of milk and honey (in this life - and in the life to come) for all of those who will lay down their pride, lay down their troubles, lay down their lusts, lay down their excuses... and run to Jesus.
So, yes, Jesus died for all... the homosexual, the heterosexual, the Jew, the gentile, the Muslim, the Hindu, the black, the white, the Asian, the alcoholic, the drug addict, the murderer, the lazy, the workaholic, the poor, the rich... And yes, His grace is sufficient to cover all sin. His grace makes the vilest sinner white as snow. He died for ALL. But, my friend, His grace covers us when we humble ourselves and seek to know the truth, instead of seeking to make God's word fit into our truth. That is when the miracle of salvation is obtainable!
As far as God's judgment is concerned, Jesus came to make a way for us to escape God's righteous judgment. He did not come to do away with God's righteous judgment. There will come a day in which every knee shall bow, and every tongue will confess that Jesus is not just Savior - but Lord! Unfortunately, many who will be confessing His Lordship on that day will be doing so with great regret, because they held their own truth higher than God's righteous truth - while on earth.
As far as Christians not wanting to grant gay marriage as part of our constitutional rights, this is not because Christians are being narrow minded and unloving. No, true Christians have a holy fear of God. They understand that He is in control of nations. They understand that God will judge a nation who turns their back on Him. So, if you are gay and you are reading this, please know that the conflict is not with you as a person; it is with the standard that God has set for all people. The United States of America is the most blessed nation on the earth because our country was built on Christian values. When we, as a society, take God out of our government, out of our schools and out of our lives, His hand is lifted and we are left to defend ourselves against the devil, his horde of demons and the enemies of our nation- alone!
So, my friend, please know that the over-all Christian concern (allthough not always voiced with humility) is not about your rights, the Christian concern is about your future; and in fact, the future of all American citizens... whether guilty or innocent. When His judgment falls, the just and the unjust are caught in the storm.
My final word is this, Go loves you! He wants you saved! He wants you free from the bondage of sin! He wants you to live a long, healthy life on this earth! He wants you to live in eternity with Him forever and forever!

-Deborah Ross
If you are gay and you are reading this article, please consider researching the following website for more on how to find this perfect peace and freedom in Christ Jesus.

https://sbmworldwide.com/
Whether you are gay or straight... If you are not 100% sure that you are a born-again child of God, please click the link below to learn more about how YOU can know this God I speak about.
http://www.deborahrossministries.com/Salvation

Thank you for sharing your Godly perspective on this topic.The nation is going down in flames because of actions by homosexuals and others who seem to ignore morals or twist the truth of God's word to make themselves feel better or to coerce others into believing they are in the right when they clearly are sinning.